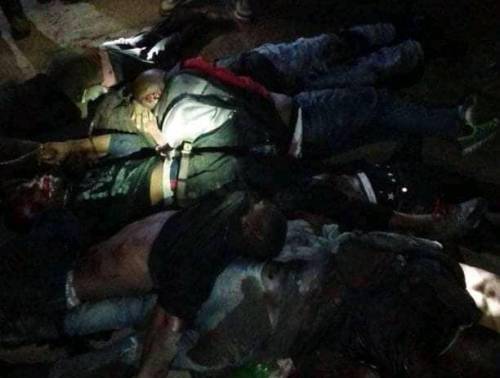 A joint operation of the Nigerian Army and police has led to the death of about 16 operatives of the Eastern Security Network (ESN), a military source told SaharaReporters on Wednesday.

The source said hundreds of security operatives on Tuesday night launched a heavy attack on the camp of ESN in Aba, Abia state, killing about 16 of them and injuring others.

9jaedublog gathered that the operation was in response to a series of attacks against security personnel in the South-East.

Not less than 20 security operatives have been killed in the region by unknown gunmen in the last three months.

Police stations are also not left out in the assault as three of them have been razed in 2021.

Three policemen were killed in a fresh attack in Ohafia LGA of Abia state on Monday.

The officers were killed while on a ‘stop and search’ operation in Abiriba town.

The gunmen were said to have ambushed them and carted away their rifles not long after they arrived in the town for a routine operation.

IPOB leader, Mazi Nnamdi Kanu, had in December 2020 launched ESN to protect the people of South-East and South-South regions from terrorists and bandits allegedly trooping in from the North.

Kanu described the outfit as a replica of the Western Nigeria Security Network, also known as Amotekun, earlier launched by the governors of the South-West to curb insecurity in the region.

“The sole aim and objective of this newly formed security outfit known as Eastern Security Network is to halt every criminal activity and terrorist attack on Biafraland,” Kanu had said.

“This outfit, which is a vigilante group like the Amotekun in the South-West and the Miyetti Allah security outfit, will ensure the safety of our forests and farmland which terrorists have converted into slaughter grounds and raping fields.”

He added that the establishment of the security outfit became necessary following what he described as the “failure” of the governors of the South-South and South-East to put in place measures to protect the people in those regions.

SaharaReporters earlier reported that the Nigerian Army had deployed combat helicopters, gun trucks, and soldiers to search some forests in the South-East states where the ESN was suspected to be camping.

Recently, it was learnt that some Nigerian soldiers resigned and joined the ESN, on the grounds that the ESN, being funded by both international and local donors, had better welfare packages for its officers than the military.

“The Kanu ESN boys are not a bunch of rookies and untrained fellows brandishing guns. I personally know five guys from my hometown in Anambra State who left the Nigerian Army to join the ESN. Two of them were formerly serving in Operation Lafiya Dole, Borno State, before they quit.

“We are being reliably informed that there are other soldiers, particularly of the South-East extraction, who will soon leave for other various reasons and they are likely to be recruited into the fold,” a military source told SaharaReporters.

In July 2012, about 356 soldiers in the North-East and other theatres of operation had resigned from the army – some on voluntary retirement, while others cited loss of interest as their reason for disengagement.

The soldiers had written to the former army chief, Lt Gen Tukur Buratai, on July 3, 2020, under Reference NA/COAS/001, quoting the Harmonised Terms and Conditions of Service soldiers/rating/airmen (Revised) 2017.

The approval of the voluntary disengagement of the 356 soldiers was contained in a 17-page circular from Buratai, AHQ DOAA/G1/300/92, signed by Brig Gen T.E. Gagariga for the army chief.

Again, this January, another batch of 127 soldiers resigned from the Nigerian Army and are due to leave by May.