Recently on twitter and snapchat is the video of a girl named Aderonke Adeniyi and three unidentified males has been trending.

The video is said to be exposed on Wednesday night before this post was made.

Having s*x is nothing new, or video been leaked but what made this a trend is that she reacted  to the viral video saying, its no man's business and she doesn't give a fuck, she is doing well and she is a self claimed olosho with good business.

She said - “I can just feel when the vibes change and i will like them or not, i will like to be imperceptible ”

Indeed she is a high class olosho with american accent, lmao.

They threatened her with the video, so she stopped asking for the money.

She is now in a serious relationship, so the guys asked her to come have sex with the three of them again of which she refused.

So they threatened her about releasing the video which they made of her but she didn't concurred to it so they let go of the video.

So with the above we considered this news as unconfirmed yet, stay tuned while we update you on this.

Below is the facebook page of the Lautech girl whose video was leaked. 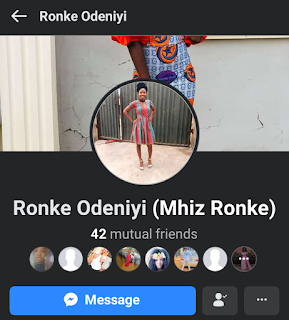 Watch the video below:

Video has been removed by an admin