BITCOIN: The Meaning Of CBN New Policy On Cryptocurrency

Cryptocurrencies have gained popularity since Bitcoin, the most valuable cryptocurrency, rose significantly four years ago. The coin went from $900 USDollar in January 2017 to almost $20,000 USDollar by the end of that year.
While cryptocurrencies are known for people making (or losing) money from trading, they have many use cases, including making cross-border payments, remittances or storing wealth (protected from inflation or exchange rate depreciation).
In countries where the official fiat currency is less reliable, cryptocurrencies have gained significant popularity: cue Nigeria and its ever-weakening naira.
For many in Africa’s largest country, cryptocurrencies were a breakthrough, and in 2017, we started to see a rise in bitcoin volumes. According to one estimate, local bitcoin trades hit $1 million USDollar in a single week.
At the same time, startups started to emerge—providing different financial solutions using cryptocurrencies and their technology. One of Nigeria’s largest cryptocurrency exchanges, BuyCoins, was founded in 2017.
It wasn’t all good news, though. Bitcoin was also very popular for individuals who wanted to get involved in a Ponzi scheme called MMM (Mavrodi Mondial Moneybox).
This connection, coupled with a few fraud causes, made African governments and regulators slightly cautious. For central banks, though, the rise of cryptocurrencies was a potentially scary movement.
The idea of digital currencies that central banks have no control over were seen as a threat to conducting monetary policy.
Putting all of this together, the CBN made several warnings in 2017 about the use of cryptocurrencies. They released a circular saying that the likes of bitcoin, “ripples”, litecoin, and other cryptos were not legal tenders.
The CBN said that these cryptos were mostly used for terrorism and money laundering activities. A year later, in 2018, they “warned” Nigerians again that we would not be able to get legal help if the cryptocurrency space crumbles.
Since then, the CBN has been relatively quiet on the matter. In fact, the global cryptocurrency scene hit a rough patch in 2019 as prices crashed.
That all changed in 2020 when prices started to pick up. The world looked at crypto again, but this time, there was a more formal acceptance. Large corporations began to buy bitcoin and also invest in crypto-related startups.
In Nigeria, businesses and individuals found that cryptocurrencies could solve their woes with the naira and help them transfer money in and out of the country. Bitcoin volumes started to rise significantly.
Last year, estimates from BuyCoins showed that total volumes of bitcoin traded in Nigeria stood at $200 million US Dollar per month. That’s more than what was traded on the Nigerian Stock Exchange ($131 million US Dollar) in Q2’2020.
This activity boosted the space, and the gatekeepers of these volumes were the cryptocurrency exchanges. Nigerians moved from exchanging bitcoin on WhatsApp groups to more formal exchanges like Bundle and Binance.
The increase in trading activity caught the eye of Nigeria’s financial regulator, the Securities and Exchange Commission (SEC), who announced that all crypto assets fall under its remit. It formalised cryptocurrencies as “securities” in a statement released in September 2020.
Fast forward to today, four months later, and the CBN is doing something almost contradictory to the SEC’s move. While one regulator was working on laws to formalise crypto assets, the other (CBN) is going in the other direction.
According to the circular, which was sent to banks, the apex bank said that dealing in cryptocurrencies is “prohibited”. They then asked commercial banks and financial institutions to identify and close the accounts of anyone involved in cryptocurrency exchange.
It’s not clear if this order includes individuals who use these exchanges or if it’s restricted to the owner of the exchanges. Nonetheless, the move is a blow to Nigeria’s burgeoning crypto market.
It’s early to say what the impact would be. In Nigeria, announcements like this can either be implemented instantly or quickly retracted. The worst-case scenario is that both individuals and exchanges will no longer engage in transactions using a Nigerian bank account.
The exchanges would also have to find another way of storing their cash.
Nigerians traded over $141M US Dollar worth of bitcoin on BuyCoins alone last year, and the CBN seems to be clamping down on this activity.
This will also harm the startups across Nigeria’s crypto landscape (not just the exchanges). Investors will have more reasons to be worried.
It’s very similar to how Lagos state unexpectedly banned Okadas last year.
What we have here is another policy that is trying to strangle a sector that has just started to find its feet and grow.

So why is the CBN doing this?

As we have repeated many times before, foreign exchange drives most of the CBN’s moves. This case is no different.
As the crypto market has boomed since late last year and early 2021, more and more Nigerians are exchanging their naira for cryptocurrencies ranging from bitcoin to dogecoin. What does that have to do with the CBN?
Well, individuals deposit naira on exchanges and buy these coins directly. However, these companies need to acquire dollars from mainly the parallel market to buy these cryptocurrencies on the international market.
So as more people buy crypto assets, more US dollars are being taken out of Nigeria. The pandemic and the resulting drop in oil prices has reduced the amount of dollars the CBN has in its reserves. And so it has been ruthless in restricting the use of foreign currency.
Last year, the government banned the use of foreign currency for food and fertiliser imports. In a similar vein, this new CBN circular is trying to achieve the same thing: stop Nigerians from demanding dollars to make purchases outside the country.
The problem with these restrictive policies is that they starve the real economy. When the CBN banned maize imports, prices shot up, and they had to turn back on the policy slightly.
This new policy has a similar effect in that it does more to reduce the welfare of Nigerians than anything else. Why ban the country from using an innovation that is solving many problems that the government itself created?
If investors had forgotten that Nigeria was a risky place to do business, this will be a very loud reminder. As much as a business, or even an entire sector, might look attractive on paper, its appeal is beholden to the whims of the Nigerian government.
This scenario is unfortunate. It seems that the government doesn’t mind alienating the startup ecosystem. But these real businesses solving real problems are instrumental for Nigeria’s long-term growth. Yet, the government is insistent on restricting their growth. 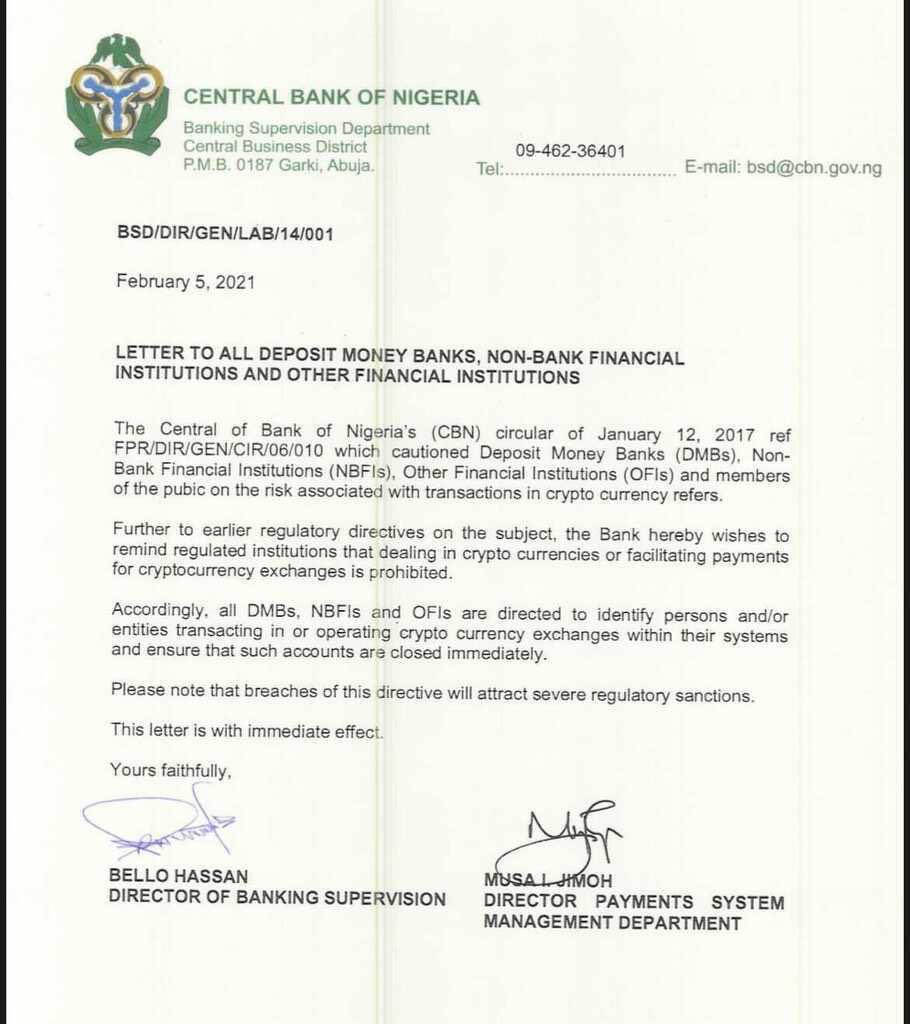 This afternoon, a Central Bank of Nigeria (CBN) circular sent to commercial banks and other financial institutions surfaced online. Here is a thread explaining what the circular means and why the CBN issued it.