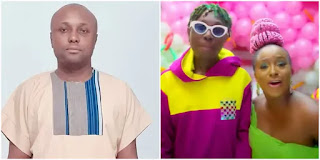 Davido's PA Isreal has revealed why singer Zlatan blocked DJ Cuppy on social media and WhatsApp. A few days ago, the billionaire daughter expressed her heartbreak on social media about being blocked by Zlatan without telling her the reason. Just recently, it was reported that Zlatan was asked why he blocked Cuppy on a TV show and he denied knowing her, to the surprise of many.

Davido's PA has now shed light on the matter. According to him, Zlatan did a hit song with the Gelato crooner and she did not give him a dime to compensate for his efforts.

Davido's PA speaks on why Zlatan blocked DJ Cuppy on social media. Photos: @isrealdmw, @Cuppy Youtube Source: Instagram Isreal went on to state that DJ Cuppy also did not compensate Zlatan after he performed at her popular fundraising event in Abuja. According to him, Zlatan used his personal money to cater to everyone who went with him at the Hilton Transcorp hotel in Abuja.

Isreal also shared a throwback video of a chat that Zlatan had with Davido. Davido seemed to have called Zlatan to ask him where he was and the latter then told him he was at the Cuppy's fundraising event. According to him, Zlatan told Davido how he was just hearing the many millions that people were donating but nothing was given to him. His revelation got Davido laughing.

In other news, Legit.ng earlier reported that DJ Cuppy shared what her dad Otedola always tells her. The entertainer said that her father often reminds her that money cannot be taken along to the afterlife.