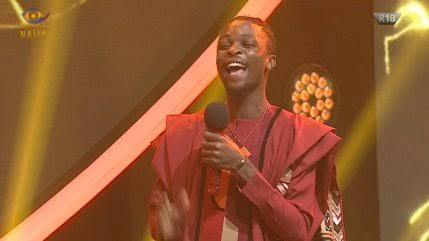 Laycon, Olamilekan Agbeleshe has won BBNaija 2020 Lockdown after 99 days of staying in the house.

Laycon has emerged the 5th winner of BBNaija after he was announced the winner of the 2020 edition tagged Lockdown.

Laycon becomes the fourth male ever to win the BBNaija reality TV show since it began over three years ago.

Laycon, who is among the last male housemate standing after spending a total of 99 days - 14 weeks - in the house, has won himself the grand prize of N85 million.

Laycon is the 5th winner of the BBNaija.

On Sunday, September 27th, 2020, Ebuka Obi-Uchendu announced the eviction of Vee and Neo from the Big Brother House.

Vee was evicted as the 16th housemate leaving the house while Neo emerged the 17th housemate to be evicted from the house.

Minutes after, Vee became the 16th housemate to be evicted.

According to the organisers, Laycon will be rewarded with N30 million cash prize, a two-bedroom apartment courtesy Revolution Plus; a top of the range SUV from Nigerian automaker, Innoson Motors; a trip to Dublin courtesy Guinness; home appliances courtesy Scanfrost.

Others are a trip to Dubai packaged by Travelbeta; a year’s supply of Indomie noodles, Munch it, and Colgate toothpaste; a year’s supply of Pepsi, a branded chiller, trip to watch the UEFA Champions League finale; and a brand new Oppo mobile smartphone.