Police Arrested 2 Men For Recruiting Themselves Into Nigerian Navy 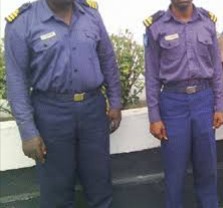 9jaedublog reports that the officers were arrested at Ijaiye, Ojokoro area of Lagos, wearing Nigerian Navy uniforms with identity cards as members of the force.

The arrest of the suspects followed intelligence information obtained by the Police when the suspects went for an illegal operation in the area and they were apprehended.

They were taken to the Police Station to properly identify themselves as Navy officers having shown the Police their identity cards with full Navy uniforms.

It was gathered that when the suspects realised that the scam has been discovered, they opened up. They confessed that they were not really Naval officers but only recruited themselves into force by procuring uniforms and identity cards.

They reportedly informed the Police that they did not have the opportunity to be recruited into the Navy and so they decided to recruit themselves, bought their uniforms, forged the identity cards and started operation as officers. They pleaded for leniency.

However, the Police found them culpable and subsequently charged them before the Ogba Magistrates Court for impersonation and forgery by wearing Navy uniforms and forging the Identity cards.

They pleaded not guilty.

The prosecutor, Mr Victor Eriuda, asked the Court to give a date for hearing to enable the Police to prove that the defendants actually committed the alleged offence.

Thus, the Presiding Magistrate, Mrs. M.O Tonimola, granted them bail in the sum of N100,000 with two sureties in like sum.

They were remanded in Correctional Centre at Kirikiri pending when they will perfect their bail conditions while the matter was adjourned till 7th October, 2020.