Full gist: Viral video of a girl dancing who was reportedly shot dead by Cult boys 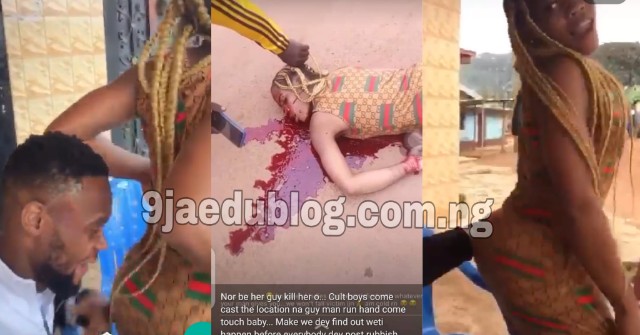 Don't believe most news you read on WhatsApp and Facebook!!! This news is currently been circulated on WhatsApp and according to rumor mongers is happened, in Edo state, Anambra, Osun state and Calabar, and the story they are attaching tp the video is that her boyfriend killed her because he caught her with another man twerking, another fake news was that this did not happened in Nigeria, it happened in the Anglophone part of  Cameroon and she was allegedly killed according to them she was having dealings with some francophone military men, so they alleged that she was selling them out!!!!

So sad, Eyewitnesses said the incident occurred during the early morning hours on Tuesday, 4th August 2020, around the locals of NSK, Enugu state.
Medical examination, according to the Officer-in-Charge (OIC) of the government-run hospital in the state, shows that the deceased was shot several times with a single barrel pistol.

The lifeless remain of the young lady was seen lying in a pool of blood in a viral video where 2 guys were taking video of her, one of the guy made statements saying, "Any rubbish wey ka for this town we dey end am ya, we no dey there when you dey chop shit. na me for you, na me for you. we no need blage***** for this level", then the other guy responded "where them even put am na ontop tyre".

At first the girl was spotted dancing at a kinda joint with some guys as seen in the video. There were drinks on the table and the 2 guys was interacting and vibing to the song Nairamarley - 'Soappy' , the girl was dancing and also shaking her ass for the guy to touch, the guy in mention is said to be her boyfriend who is a cultist and she is quite aware of this even the clash between her boyfriend and the other cult members. This is an unconfirmed news though but 9jaedublog promises to get back to you as updated as you can with the full gist and arrest of this culprits.

Its said that the guys who came had a target on her boyfriend who is their rival as a cultist. The target escaped when these cult boys came and left the girlfriend who was not fast enough to escape. Unfortunately she was shot dead on her way trying to escape. So, these guys took video of her and sent to her boyfriend to show their revenge already.