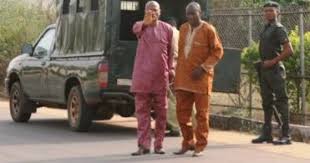 Two pastors who defrauded millions from unsuspecting victims will spend at least 26 years in prison.

Pastor Glory Okeoghene Aberefa and Reverend Vincent Okpogo have been convicted and sentenced to 16 and 10 years imprisonment respectively by Justice F. N. Azinge of the Delta State High Court sitting in Otor-Udu.

The duo, alongside their company, Mustard Seed Micro Investment Limited, were prosecuted by the Benin Zonal Office of the Economic and Financial Crimes Commission, EFCC. Under the guise of running a finance company, the convicts defrauded dozens of unsuspecting members of the public of millions of naira, through their fraudulent Mustard Seed Micro Investment Limited.

Pastor Aberefa was sentenced to one year imprisonment on each of the 16 counts, while the second defendant, Reverend Okpogo was sentenced to one year imprisonment each on count seven to 16. The sentences are to run consecutively. The convicts, already in prison, were earlier jailed 17 years by both the Federal High Court, Asaba and Delta State High Court, Warri.

They would now serve a new sentence, which Justice Azinge said would take effect after completion of the extant 17 years imprisonment.