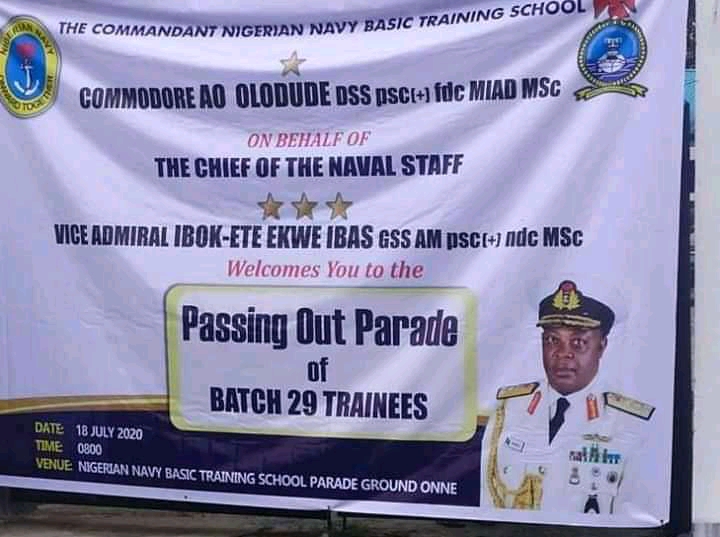 After several months of Military education and training which establish and improve the capabilities of military personnels in their respective roles, we are glad to announce the passing out parade of Nigerian Navy Batch 29 trainees which is to be held in the Nigerian Navy Basic Training school, Onne Rivers State on the 18th of July.

Their training begins with recruit training, proceeds to education and training specific to military roles, and sometimes includes additional training during a military career.

The glorious day these young officers are awaiting is here, time for the program is stated in the banner above to be 0800 hrs and a ceremonial parade will take place to accompanying their passing out.

The Nigerian Navy has recruited no fewer than 1,176 young men and women to aid its fight against sea pirates and oil bunkers in the nation’s maritime domain.

He said: “The trainees have been adequately groomed in basic naval seamanship subjects, including swimming and weapon handling.

“Additionally, they have been imbibed with such basic skills, as self-discipline, team work and overcoming of problems.

“The trainees were also tutored on basic civil military relations, inter-agency cooperation and laws of armed conflict. They have been transformed and ready for deployment.”

Olonisakin the trainees were joining the navy at a time the armed forces were involved in many complex and challenging internal security operations across the country.

Watch Video of Match Pass and Drills performed by this recruits below:


Kindly share this post to everyone, the awaiting batches who are yet to go for their training and to the loved ones who are awaiting their brothers and sisters to come out of training. Drop a comment below.