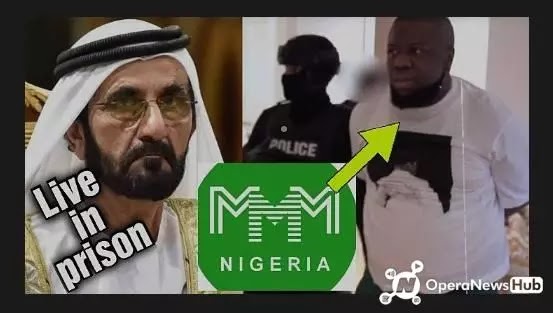 Popular Nigerian Instagram celebrity, Hushpuppi arrested 10th of June 2020 in Dubai, he is being held by Dubai Police and not America’s FBI or Interpol as widely reported.

UAE’s online newspaper, The National reported Wednesday that he was arrested on multiple fraud charges, along with 12 other accomplices.

The paper also revealed his real name as Raymond Abbas and his real age as 38 years.
His case has been referred to the Dubai public prosecution and is currently being questioned by prosecutors at the Bur Dubai section, the paper reported.

“The prosecutors have charged him for “obtaining money from others through fraudulent means.”

According to UAE National, security officers in the emirate arrested Mr Abbas and 12 others for online fraud that targets companies and individuals

Since after Hushpuppi was arrested, people have been sharing their opinion on the issue and the one making waves now is the possibility of Hushpuppi's connection to the MMM scam.

This is as a result of the huge amount of money linked to him by the Dubai Police in the recent video released, which is estimated to be over 1.6 billion Dihram which in Naira is valued at 169 billion Naira. In the video released by the Dubai police, Hushpuppi was more focused on, which states that he is the head of the gang.

The case which has now made Nigeria's reputation dirtier will definitely affect Nigerians with legitimate businesses outside the country.

For instance, Nigerians working in Dubai are currently restricted from working in some key organisations like security jobs, financial jobs, sensitive jobs and more confidential jobs.

There is a high possibility of Hushpuppi being transferred to Saudi Arabia from Dubai, and Saudi Arabia's legal system is the incorruptible Sharia Law, they have a strict law which cant be break easily.

With this article you've read, what is your opinion on the MMM being link with Hushpuppi? Please comment below.