Azeez Fashola (born 9 May 1994), known professionally as Naira Marley, is a Nigerian singer and songwriter. He is known as the president of his controversial fan base, "Marlians".

Naira Marley was born in Agege, Lagos State, Nigeria. At the age of 11, he moved to Peckham, South London, England. He studied at Porlock Hall before attending Walworth School, where he obtained his General Certificate of Secondary Education. Naira Marley graduated with a distinction in business from Peckham Academy. He also studied business law at Crossways College (now Christ the King Sixth Form College).

Next, I will be discussing about Lilsmart, his real name, how his career started till he gets famous, how he met with Nairamarley.

Lilsmart known as the Tesumole Dance Creator, real name is Idowu Smart Emmanuel. He is/was a Trap Dancer, Model, Actor and song writer. He was born on the 9th of March 1998 and hails from Abeokuta, Nigeria. He is based in Ikeja, Lagos state.

Lilsmart is a Nigerian of nationality and is aged 22 years, he started dancing from his early age when he was 10 years old. Lil smart has perfect skills for skate boarding and uses this as an advantage to run deliveries for companies at his youth age and also goo for competitions of which he got so many awards from. He truly is a multi talented kid. When he started dancing, his mentor was Ayo and Teo (Ogleloo & Shmateo), he dresses and dances like them. He imitate them by wearing different color shoes and reversing his pants too. He started his NSSG (No Same Shoe Gang) now he has already came into Limelight.

Lilsmart was at 5k+ followers on Instagram trying to maake it to the top, when he came across Nairamarley's Marlian trends, Lilsmart wanted to dress like him and also dance like him. He already started getting the compliment of him having so much resemblance as Nairamarley and being called a marlian.

Lilsmart got so much obsessed with Nairamarleys looks and music, he sworn to be a marlian and vow to do whatever it takes to be a marlian. He started making mimicking videos and pictures of Nairamarley. He gave out his belts and started keeping beards like Nairamarley.

Lilsmart started dancing the viral dance called LEGWORK, which he was very perfect at it, he made a mimicking video of the viral PUTA music video released by NairaMarley and post to his Instagram then asked his followers to re-post till NairaMarley sees it, he wanted to get to the attention of Nairamarley. As of now NairaMarley has not met LILSMART.

He kept on making efforts to ensure Nairamarley gets to notice him. So people kept on tagging and mentioning Nairamarley in Lil smart's videos. He also got reposts from so many friends even on twitter and other social media platforms which brought him so many followers. 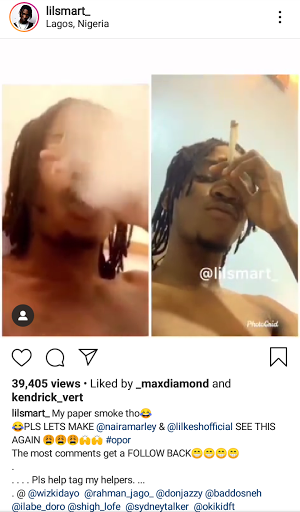 Finally Nairamarley saw his video and reposted it, which brought Lil smart influx of followers. He got to around 15k followers. Ayo the creator of reverse dance also reposted Lilsmart's trap dance video which brought him followers from all over the world that same day he got to 20k followers on Instagram

Lilsmart is the appreciative type, his video was posted by many popular bloggers and other celebrities that same day he got to 50k followers. Now his DM was filled with "I have a concept I want you to be in'. He danced with other famous dancers e.g Poco Lee, Sydney talker, Destiny boy, fatherdmw, seen pizzle etc.

He met with Nairamarley in November 2019. Nairamarley invited him over and made him his personal dancer, they went on stage several times all through Marlian fests and early this year 2020, they tour around going to many shows and concert.

Nairamarley is not related to Lilsmart, Lil smart only met with him along the way. Lil smart became very popular as they both launched the Tesumole dance which went viral around the globe. Lilsmart moved from 50k to 100k followers and few weeks later he is at 200k+ followers.

Please share with friends, we bring to you the hottest topics on net. Drop your comment below