Who is Mc Laz Comedian? Lazarus Otu Odey popularly known as Mc Laz Comedian who hails from Ogoja, Cross river state was born on the 5th of January, 1995. He grew up in the city of Lagos Ojo local government to be precise. His is the CEO Mc laz Entertainment. He was raised by both parent with seven (7) other children. He is popularly known for his stage name “MC LAZ”
Have you checked: Shocking: Landlady stabbed tenants wife almost to death in Lagos 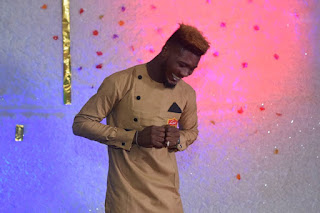 Mc laz Entertainment has hosted several events since the year 2016. Mc Laz Comedian is the executive producer of Laz Man Standing (Comic relief with mc laz), he has performed in almost all the Five-Stars Hotels in Lagos. MC Laz is the former sales Executive for Spectranet Limited. He was present at AY LIVE, Expensive Laughter with Akpors, Comedy Century with Babahkay

He worked in several hotels as a bar man in Ausken Royale Hotel at Ojo and Sada Cruze, Festac. He also worked as a sales representative in different organization.
He started is carrier in Comedy because his friends founds him funny and encouraged him to check out comedy line. Although few never allowed him to hold up the stage.
He started Acting in movies in the year 2010 with Tu unique Entertainment, Which led him into acting comedy.
He was presented on Stand Up Comedy. He later on because personal assistant to some celebrities.
He sees Comedy as a very good way of reaching out to the masses in a comic manner so they don't feel offended.
He said, “It relives pain from most human and it's a good means to cure internal stress
It relives human stress.. Also it makes the ability of an individual to portrait the lives in human joy”.
To him, Comedy is a very big business, which can yield good fortune in a period of one minute. Its a method of income, depending on your commitment and perseverance.
You can reach him up with the following
Instagram: Mclaz comedian
Facebook: Mc laz comedian
Gmail: [email protected]