Earlier Davido put to his twitter handle talking about the roads in his state of origin (Osun State), that all the roads are bad and it's so sad to see everything the way it was.

While a twitter user has accused his Dad Mr Adeleke for not repairing the roads saying instead of him to give money to repair the roads, he had rather use money to buy private jet.

In his words; "Your daddy buying Private jets up and down why don't you tell your daddy to channels the money to provide good roads for his people" 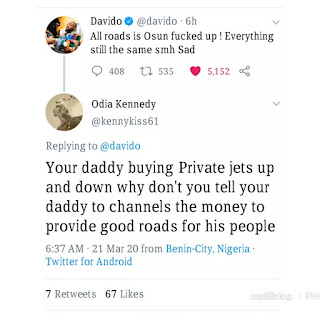 Davido has replied him saying why can't he provide money for the roads if the government had allow him to do so.

Which means his dad (Mr Adeleke) has made so many attempt to construct the roads but the government didn't approve his proposal.

Some also said if you want to construct any government roads, you have to grease somebody's palm to do so. This country is somehow to be honesty, anyone that his willing to do government roads, he/she has to bribe people above before they can. The roads they are supposed to do, someone is willing to, but they won't allow.

Davido a multi-billionaire Nigerian business man who just acquire a new private jet has been attacked again on social media.